Google Reader is no more, which has opened up the feed reader app scene to new ideas and business models. With the plethora of new feed readers out there, I won’t get into a comparison of the different products on offer. After all, it has only been a month since Google Reader was shuttered. I’m sure the landscape will shift significantly over the next few months as smaller companies and independent developers vie for a slice of Google Reader’s former userbase.

I like my feed reader to behave like an email client – running in the background, collecting articles so I can read when it’s convenient for me. Up until recently, I had been using Reeder, but the app’s author has neglected to update it to work without Google and frankly, I’m tired of waiting.

While searching for a Reeder replacement, I soon noticed two things: one, most of the new crop of feed readers are web-based. Two, the Mac apps on offer typically don’t support Snow Leopard.

I ended up settling in with MnmlRdr, a no-nonsense web-based feed reader being developed by Jordan Sherer. By eliminating superfluous features like social sharing, MnmlRdr has carved out a nice niche for itself in the flurry of Google Reader alternatives to come out in the last month. Its responsive design feels comfortable on my old Blackberry for on-the-go reading, which is a major perk. I’ve emailed the developer a couple times with bugs and feature suggestions, and he’s always quick to respond.

Since MnmlRdr is in a private preview right now, Here’s a quick screencast to show what the user experience is like:

You’ll notice that I have MnmlRdr running as a separate app on my computer. I used Fluid to make that happen, and it works beautifully. After a couple tweaks, MnmlRdr feels comfortably at home on my desktop.

MnmlRdr’s boxy logo looks great on the website, but it’s a little imposing when nestled among my other dock items. So, I created an alternative logo.

To use this icon for the Fluid app icon, save the image and go to Preferences > General. Click the Change... button next to Application icon to update the icon.

If you purchase the paid version of Fluid, you can add userscripts to your apps. this lets you do neat things like have a badge showing the number of unread articles. Here’s how.

Go to Window > Userscripts, and click the plus sign in the bottom left corner. Change the pattern from *example.com* to *mnmlrdr*.

In the script field, copy and paste the following code. This will check the page’s title bar every 5 seconds to see what the unread count is, then display it as a badge on the app icon.

So, that’s my setup. If you subscribe to RSS feeds, how have you adapted to a post-Google Reader world? 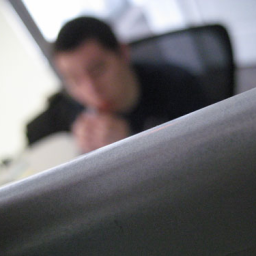